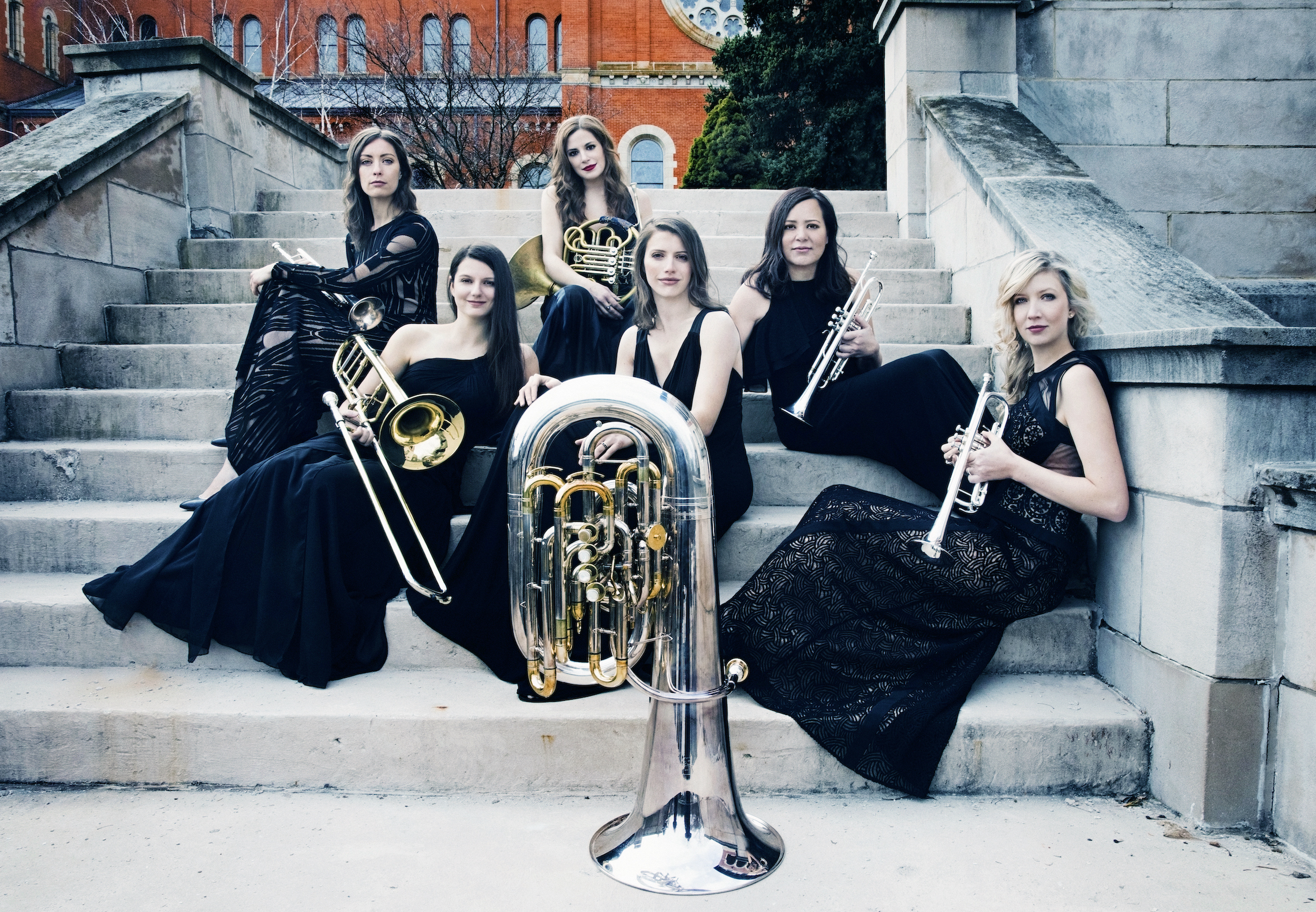 Seraph Brass has toured throughout the United States, Mexico, and Europe. They have performed multiple concerts at the Lieksa Brass Week in Finland, and they were the featured ensemble at the International Women’s Brass Conference. Seraph has performed concerts at the Forum Cultural Guanajuato in León, Mexico, Dame Myra Hess Concerts in Chicago (IL), Gettysburg Concert Association (PA), Norton Museum of Art in West Palm Beach (FL), SUNY Cortland (NY), Jamestown Concert Association (NY), and they have toured extensively as Allied Concert Services artists. Seraph is on the roster of the Manhattan Music Ensemble. They performed with the Rowan University Wind Ensemble, performing Rick DeJonge’s Prelude and Fantasy under the direction of Joseph Higgins. Many members of Seraph Brass have performed with Adele on her 2016 North American tour.

“The stage lit up, as Bowden showed why Yale’s graduates are so highly regarded.”

“Those in attendance enjoyed listening to Bowden nail Catherine McMichael’s Totem Voices, a multi-movement work that highlighted her excellent control and phrasing. Hall and Bowden then delivered a very impressive performance of Joseph Turrin’s Arabesque for Two Trumpets, after which the crowd roared."

“Joseph Hallman's Sonata for Trumpet (and Flugelhorn) was played with impeccable precision of tone and technique by the performers, Mary Bowden and Milana Strezeva. The third movement included much technical work that Bowden handled effortlessly. The piece showcased the multitude of talents of this rising star in the trumpet world.”

“Mary Elizabeth Bowden looked as willowy and elegant as a high-fashion model as she delivered the Arutunian Concerto for Trumpet and Orchestra. The long stretches of multiple-tongued passage work were dispatchedwith striking precision and the lyric moments were invested with bronzed, singing tone. Very impressive.”

Music Through The Door

“The Chameleon Arts Ensemble completed its exploration of Bach and the Baroque’s influence on subsequent generations by returning to the source and giving us all six Brandenburg concertos in a single evening. The second half opened with Brandenburg No. 2, notable for its high-register concertino of flute, oboe and clarino trumpet; in this instance Mary Elizabeth Bowden, to great effect and with no apparent effort, played a piccolo trumpet with rotary valves. The allegro was played briskly, square, tight and muscular, followed by a tender and exceptionally expressive andante while the trumpet rested. The third movement fugue was delightful, with wonderful interplay among the soloists.”

“Bowden executed the difficult leaps (and in a high register for her trumpet) with ease and aplomb.”

“The high calibre of the playing is often staggering (see the high-energy roller-coaster of a ride that is Dilorenzo's three-and-a-half-minute Go)… One comes away from the release marveling at the performances and the rich, soaring sound generated by the five musicians.”

“This is a very fine brass quintet that makes beautiful sounds."

“She performs with authority throughout, whether executing notes acrobatically or murmuring softly, and her playing exemplifies poise and clarity… All things considered, it's safe to assume admirers of Bowden's Radiance will be as impressed by this latest collection.”

“With some amazing arrangements as well as some works by living composers, this CD offers an unusually attractive program, which is ravishingly played by the American trumpeter Mary Elizabeth Bowden…There are no limits to Bowden’s music-making. She is highly virtuosic, but also masters the most delicate and lyrical tones…her art of colours and the warmth of her tone are particularly striking. There is nothing shrill, nothing seems uncontrolled, and everything points to an absolutely sovereign mastery of the instrument.”

“There’s something about Mary Elizabeth Bowden and her ability on the trumpet – a fluid sense of light and dark, of grace and power…”

“The opening piece, Escapade–by the easy to enjoy American composer Joseph Turrin–immediately shows off Bowden’s brilliant and colorful sound. [David Ludwig’s] Radiance is a dreamy, yet thoughtful work, awash with delicate tonality and an uneasy tranquility. This is a musical business card for a very fine young artist, and it works quite well.”

“Bowden's sound is indeed "radiant"-very clear, focused, slightly lighter than some, but marked by dramatic power and elegant lyricism. She is equally at home on the high piccolo trumpet as on the larger horns...This is a very enjoyable recording that will prove of great value to trumpeters and all lovers of new music.”

“Her piccolo trumpet tone is pure, refined, and warm—quite impressive. She sounds even better in David Ludwig’s ‘Radiance’ for piccolo trumpet and strings. It is a lyrical work with big leaps up to very high notes, and she does them with no apparent strain.”

“A splendid debut recording of classical works by trumpeter Mary Elizabeth Bowden, especially when her playing is so expressive on the eight compositions. On technical grounds, she's an exquisite player whose polished tone is heard in ample supply on the seventy-four-minute release.”

“The title-track “Radiance," an adaptation of David Ludwig’s plaintive soliloquy for oboe and strings, shows just how chaste and radiant a piccolo trumpet can be…Splendidly played... Bowden does her best work on James Stephenson's erratically stylish track "Croatian Trio".

“The title-track 'Radiance' shows just how chaste and radiant a piccolo trumpet can be … Splendidly played. Bowden does her best work on James Stephenson's 'Croatian Trio'."

“There’s something about Mary Elizabeth Bowden and her ability on the trumpet – a fluid sense of light and dark, of grace and power …”